Togo is one of the poorest countries in the world. The disastrous economic situation not only leads to impoverishment of large sections of the population, but also for the dissolution of traditional family associations and rural depopulation, especially by younger people.

With increasing illiteracy, access to the few jobs available is difficult.

Almost 60 to 70% of the population in Togo have no clean water, no toilet, no sewer. Moreover, the main problem: no degree and no formal education. Poverty and social action skills in the growing population threatens to become irreconcilable conflict and lead to a political crisis. The increasing poverty leads to illness and a continuous misery especially the children's future is hit hard.

Many people live on the poverty line. Education and health care are increasingly becoming luxury goods.

For the mass of the people they are unaffordable. So the idea of a children's aid project, which is to children and young people open a hopeful future through proper care and education and training arose.

The association VIVO eV Recklinghausen has begun the preventive action plan to reduce poverty in Togo, particularly in village areas step by step. Much too high youth unemployment paralyzed the entire future of Africa. The sample project VIVO is a social-based project and can be the perspectives many countries in Africa or Examples occur in the developing countries. The solution is education funding.

Robert Koami Dougban, initiator of the project Children's Village VIVO eV in Togo, traveled in 1983 with his car through Africa to his continent a little more acquainted. He wanted to make his own image. By car it is of Recklinghausen port of Marseille (France) by boat across the Mediterranean to Algiers (the capital of Algeria) and with the loaded car full of food and 30 liters of water, traveling all across the country. The trip across the rocky roads Gaadäa, to El-Goläah, In Salah, Assamanka and through the desert Tamanrasset to Arlit (border Algeria - Niger) and Benin are impressive experiences and not have been safe. Robert K. Dougban got to know the people and especially poverty. He realized that there is also a kind or a more extreme poverty between rich and poor and luxury and misery in Europe. The entire image of Africa during the trip moved him emotionally, and he wanted to do something about it. "Break bread from the hungry who wander in misery". As if he was caught by a magical strategy. This experience and the poverty that he had seen with his eyes, he could not wipe from his soul. He called the continent of Africa "Patient Africa"

This feeling to help, but not he could not bear to help. So he decided to write a book "ATOPANI". The proceeds Dougban want to help the poor people in Togo. At the same time he founded the association with the vision of a children's village in Togo VIVO erect. To enable a better future and a better life for the children. 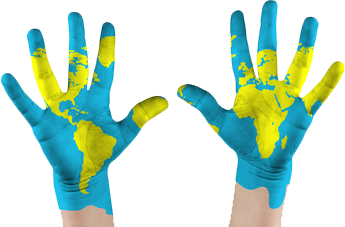